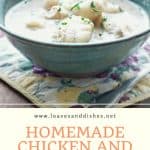 In a comfort food show down what would win? I’m pretty sure Homemade Chicken and Drop Dumplings would be right at the top of the list for “creamy from scratch chicken goodness”.

She has tried using biscuit mix. She tried using the ready made frozen dumplings. She has tried lots of other suggestions – I’m guessing things like using canned biscuits and tortilla shells. I didn’t ask though because she made a face that said it all. “NONE OF THAT WAS ANY GOOD”.

She also said that she had tried several recipes and none worked out very well.

So – I’ve taken that as a challenge. Personally, I grew up eating the fat flat noodle type of Chicken and Dumplings and you can find that recipe HERE. One of my favorite memories is my grandmother standing at her kitchen counter with the dough rolled out directly on the counter and her cutting long ribbons of dough with a butter knife turned backwards. 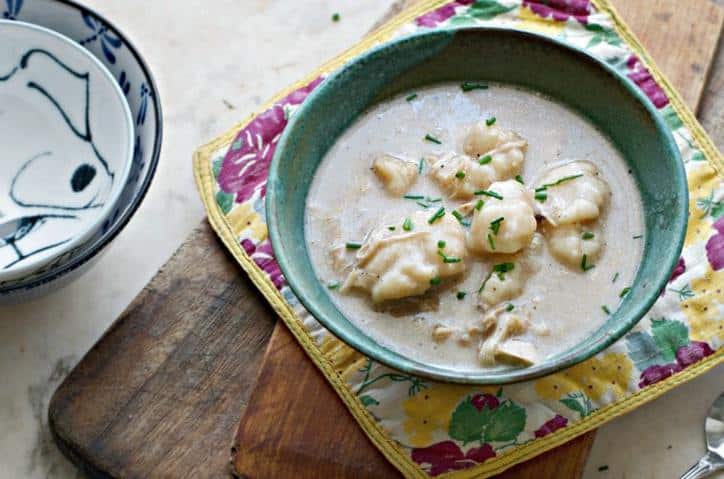 HOW TO MAKE HOMEMADE DUMPLINGS FOR CHICKEN AND DUMPLINGS?

That is the question, right? If you like the noodle style chicken and dumplings then check out the recipe HERE. If you want to know how to make the drop biscuit dumplings, then hang onto the recipe in this post.

Basically, we will precook the chicken, deglaze the pan, make a stock, pick the chicken off of the bone, put the chicken back in the pan, bring to a simmer while mixing up some biscuits from scratch and then  – very carefully – we will drop SMALL pieces of the biscuit dough into the boiling stock, then cook till done. See? Simple. 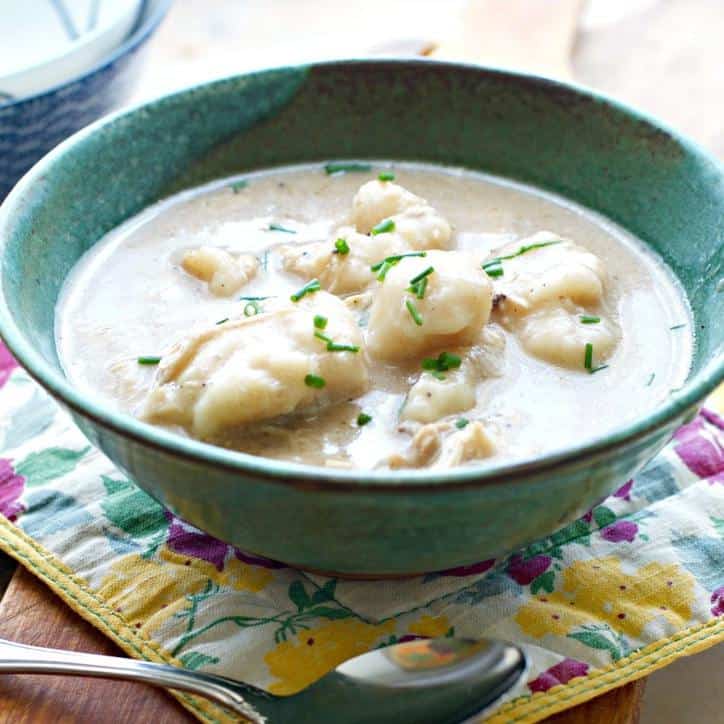 You might want to know, HOW DO YOU MAKE DUMPLINGS FROM BISCUIT MIX

That is simple, but not recommended by me. Just follow the directions on the side of the box for making a biscuit and use the dough to drop into the chicken/stock mix. Seriously though, if you want genuine chicken and drop dumplings, then follow this recipe and be careful to follow the Tips and Tricks.

THE RECIPE FOR HOMEMADE CHICKEN AND DROP DUMPLINGS 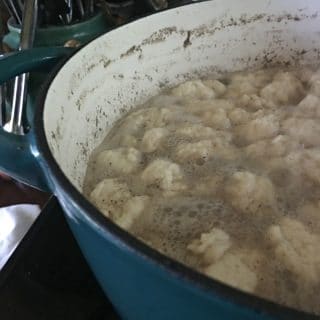 Use very small spoonfuls for the dumplings or they will taste doughy. If you want your soup thicker, coat the dumplings with an extra dose of flour before dropping in the pot. 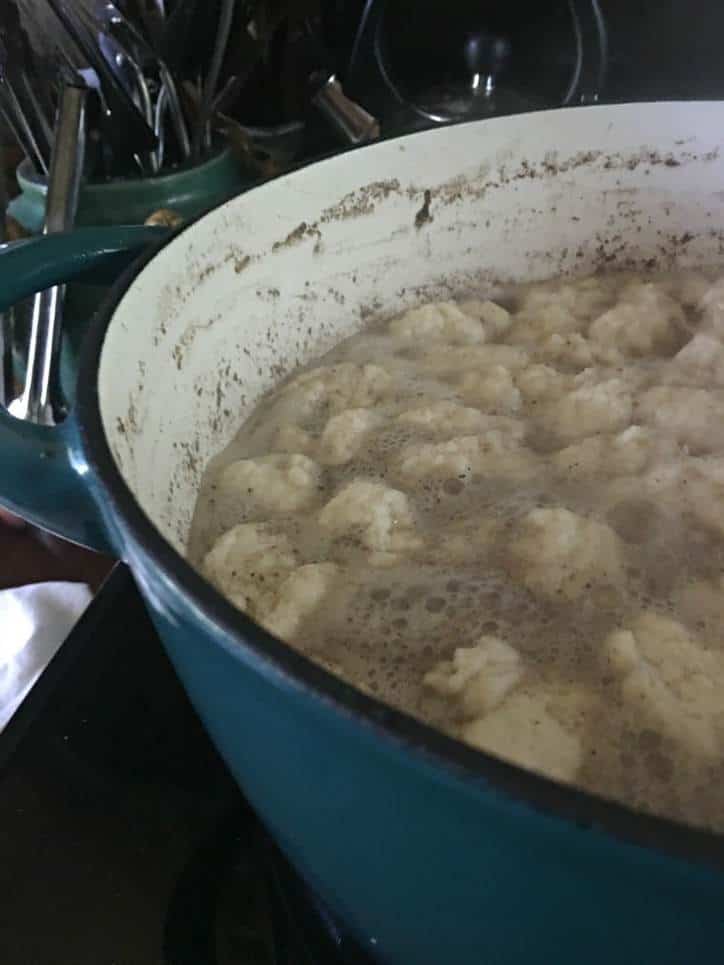 An upclose look at the dumplings as they cook on the stovetop. See how they float and kind of bubble up?

TIPS AND TRICKS FOR HOMEMADE CHICKEN AND DROP DUMPLINGS

The other day as I was heading into a patient’s home, there was a sound. I didn’t notice it much at first and then suddenly, it was on MY VERY LAST NERVE! I became irritated and aggravated and I COULDN’T WAIT to get into my patient’s home and get away from that SOUND!

I am POSITIVE that when the wind chime was new, it had a lovely tune. Playing its low dong with every small breeze delighting listeners with its joyful tune. However, when all of it’s other chimes had fallen off – it had only one note left. Clang clang clang. On and on.

How completely irritating, someone put it out of it’s misery!

This reminded me of our own national issues right now. I would dare say that some have become a clanging gong at this point. I’m going to be completely revolutionary and say, it’s time to give love a chance.

Those who cling to the same old note, never trying anything new and never adding a dimension of love to what they say are like that clanging windchime. One single note over and over getting on the very last nerve of the people they hope to inspire.

Is there ANYONE with me on that?

Love is patient, love is kind. It does not envy, it does not boast, it is not proud.  It does not dishonor others, it is not self-seeking, it is not easily angered, it keeps no record of wrongs.  Love does not delight in evil but rejoices with the truth.  It always protects, always trusts, always hopes, always perseveres.

Love never fails. But where there are prophecies, they will cease; where there are tongues, they will be stilled; where there is knowledge, it will pass away.  For we know in part and we prophesy in part,  but when completeness comes, what is in part disappears. When I was a child, I talked like a child, I thought like a child, I reasoned like a child. When I became a man, I put the ways of childhood behind me. For now we see only a reflection as in a mirror; then we shall see face to face. Now I know in part; then I shall know fully, even as I am fully known.

And now these three remain: faith, hope and love. But the greatest of these is love.

This recipe made a delicious soup base. Used fresh turkey legs in place of the chicken and made the frugal gourmets drop dumplings with duck fat instead of the dumplings mentioned here. I will use this method to make chicken/turkey noodle/dumpling soup time and time again. Easy and straightforward. Yum!

Hi Sarah! Thanks for stopping back and letting me know how yours turned out! Perfect for the holidays. :)

This recipe looks delicious. We make dumplings here in the U.K. that are a combination of flour, baking powder and suet. Dropped on top of stews they are baked in the oven, or on the stove top with a lid on to encourage steam. I definitely have to try this inheard of version. Thank you for a great recipe. I absolutely agree with you. Light can only shine in darkness. Now, more than ever we should not fear, but pray and trust in Him who appoints our government and leaders.

Sammie, That is so interesting! This is a common "country" or "southern" dish here. I hope you give it a go and let me know what you think!

I read every tip you offered! Tips are great! This is a recipe I believe my family will like. even though we always make flat dumplins. Sometimes change is good. Pinned, Thanks for sharing. Have a great week!

Hi Mary!!! Thanks for READING ALL THE WAY through the tips! You are a trooper!!! :)

This is close to what my mm used to make... So good. I grew up with fluffy dumplings and first hand them after moving to NC. I am so ready for cool weather to make this!! I can smell it now.

Hi Pam!!! I too am ready for cool weather - so thankful that it is slightly cooler today! :)