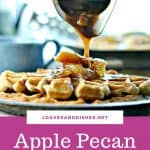 What is better on a cold rainy morning or cool cloudy evening than a stack of hot waffles drenched in a sweet apple cinnamon topping? Uhhhhhh…… nothing! Well, I know that my hubby was hoping that I would make a Kale Cranberry Granola for his breakfast – but instead he had to deal with rich, sweet, nutty, cinnamony and slightly crunchy Apple Pecan Waffles with Apple Pecan Topping. Torture, I know. How can I treat him like this? 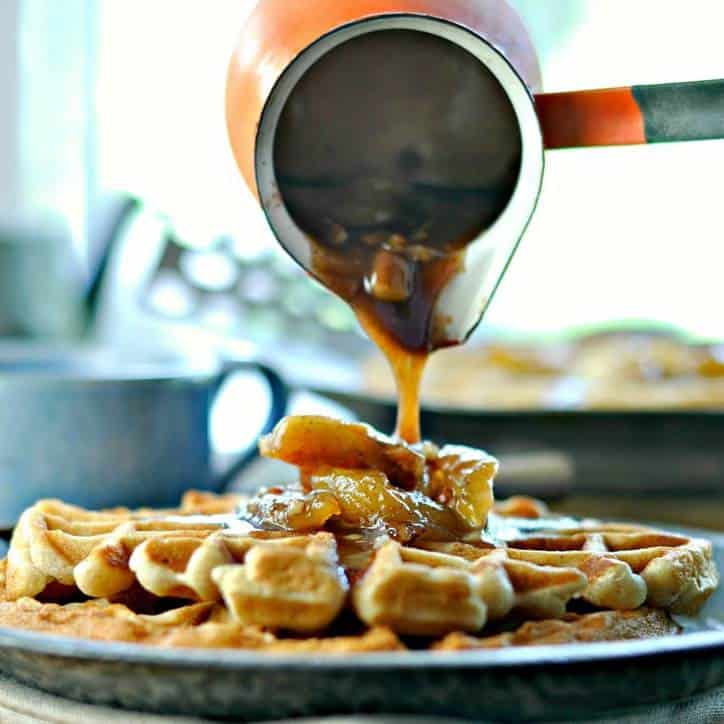 So – these waffles were inspired by my recent trip. I know you know. I went on a trip to the International Food Blogger Conference a few weeks ago in Seattle. Wow! What a weekend. I am STILL pumped! My daughter, Sarah, who contributes to Loaves and Dishes went too and we had a WONDERFUL time!

One session that Sarah attended was “Food Trends”. A tid-bit that was shared was that savory waffles would be BIG this year. So – I’ve been thinking on that. I’ll get there. These are definitely NOT savory. Oh NO! These Apple Pecan Waffles with Apple Pecan Topping are the BEEESSSSTTT kind of sweet treat – the opposite really of savory. 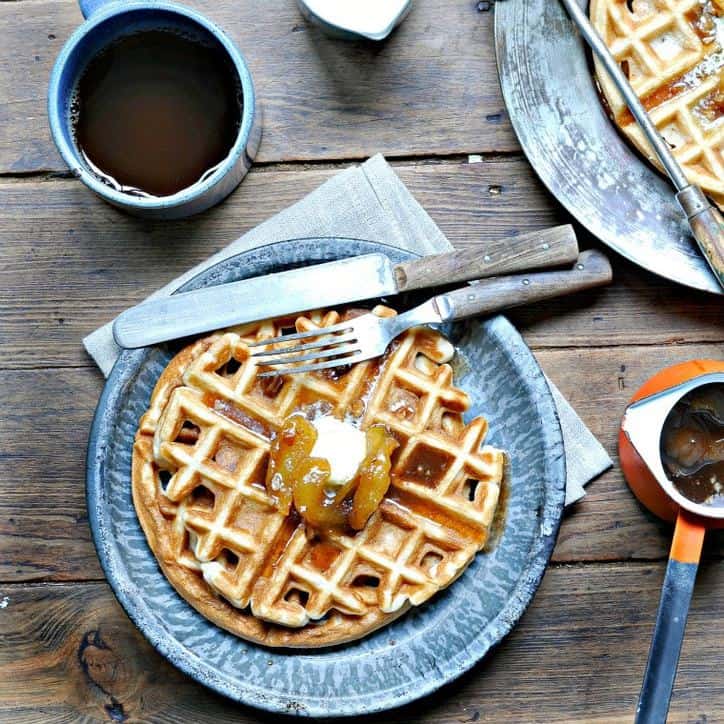 I DO own a waffle maker – it came with a deal I did about 4 years ago (when I got married). I’ve never used it though. As I tried to think of some savory flavors, I could only think, “Apple Pecan Waffles with an Apple Pecan Topping”. It kept repeating itself in my mind like some kind of weird record skip. So, I couldn’t let it go. I will have a few of those savory waffles coming. I hope anyway (haven’t tested them yet – so, who knows?). (I had a HUGE FAIL last week in this same vein – but that is another story – testing is SO IMPORTANT in food blogging. LOL!).

So – anyway, this weekend, hubby and I dusted off (and washed) the waffle maker. Turned it on. Did a few practice waffles and WOW! They were good! I’m really not crazy about how one is supposed to clean a waffle maker – I mean really – who invented that idea? Why don’t the plates come out so they can be cleaned well? Cleaning – that isn’t a topic we want to discuss though, is it? This is not a cleaning blog….. Thank God, because you people would have nothing to read!

One of the sponsors of the IFBC was Krusteaz. They have a TON of mixes that make life so much easier AND they are super nice people (all my own opinion)  ***I want to make sure that you know, they GAVE me a box of the Belgium Waffle Mix and that is what I used for this recipe***  I really do appreciate the free mixes! So, while this is not a sponsored post – I did get the mix for free as part of their promotions at the conference. You can use ANY waffle mix you prefer for this recipe, however.

As always, any opinion expressed here is mine. 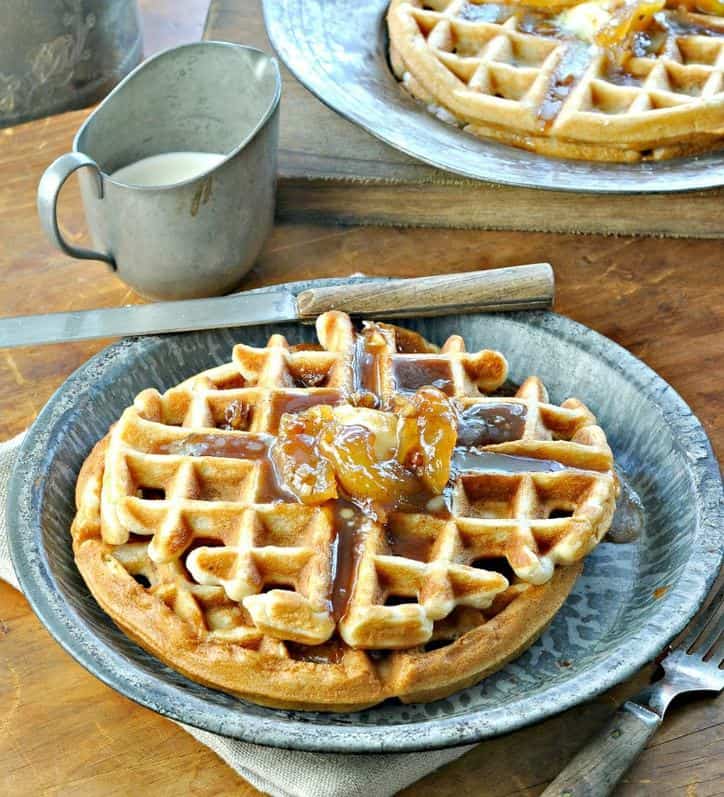 Finally, just so you know, *** I did receive a discounted conference rate of $195 in exchange for 3 posts concerning the IFBC and this is my THIRD post regarding that effort***

You can find the first two posts HERE:

So – with that, I was hoping you  might give me some idea regarding savory waffle flavors you would like to see? I’ll give it a go if it sounds reasonable and doesn’t involve seafood! Leave me a comment below (the comments are WAY at the bottom). I LOVE to hear from you and PROMISE to answer every message.

I mean, we could do Broccoli Potato Waffles. Tater tot waffles with bacon a cheese. Truffled Hashbrown Waffles with Parmesan and Chives. We could do….. I don’t know – what sounds good?

Think on that while you gobble up some of these Apple Pecan Waffles with Apple Pecan Topping.

For the kingdom of God is not a matter of eating and drinking, but of righteousness, peace and joy in the Holy Spirit, 18 because anyone who serves Christ in this way is pleasing to God and approved by men. 19 Let us therefore make every effort to do what leads to peace and to mutual edification. ~Romans 14:17-19 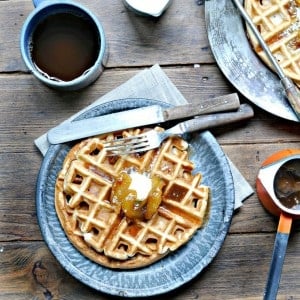 For the Apple Pecan Topping

You could also substitute pears for the apples.  Delicious.

I made these and my husband won't quit talking about them. It's a problem

Oops I didn't mean to make you cry X. I am now awaiting a waffle maker to review for my blog, so I'll get to try these pancakes sooner rather than later. I will definitely let you know how I get on. Sammie x

Firstly, thank you for really cheering up my day. Your wit and writing are just what I needed this morning. This recipe looks so yummy, I'm putting a waffle maker on my birthday list! Definitely a waffle with bacon and perhaps walnuts, I think the savoury flavours would be awesome with a fried egg on top?! Secondly I cannot believe I have found someone who not on shares my beliefs, but also believes in sharing food, with those we don't know well. Again thank you for such a warm welcome to loaves and dishes. Sammie.

Awwww Sammie. You have made me tear up this morning. Thank you so much for the kind comments. :). I will definitely come over and check out feasting is fun!!! I hope you get that waffle maker! I love your ideas about a fried egg on top!! Fried eggs are good on EVERYTHING!! I had actually planned to test a new waffle recipe this week but haven't made it that far yet. :). Long week. Take care and see you soon!!