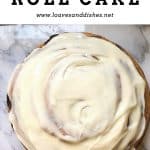 Warm, crunchy on the outside and cinnamony, fresh and soft on the inside with frosting that makes you mouth tingle in excitement! Cinnamon Cake Roll From Scratch!

Made from scratch, yet easy to do! You’ll be tickled to whip up this decadent and beautiful GIANT Cinnamon CAKE! 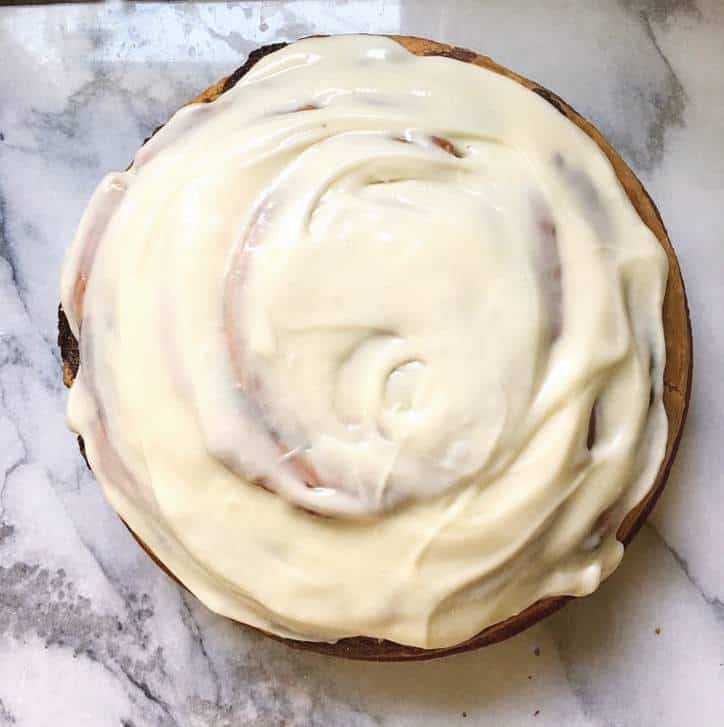 Why This Recipe Works…

This Is How It’s Done…

Cut a parchment paper circle for the bottom of the cake pan.  Spray the pan with non stick baking spray FIRST, set the circle down and then spray again on TOP of the circle… 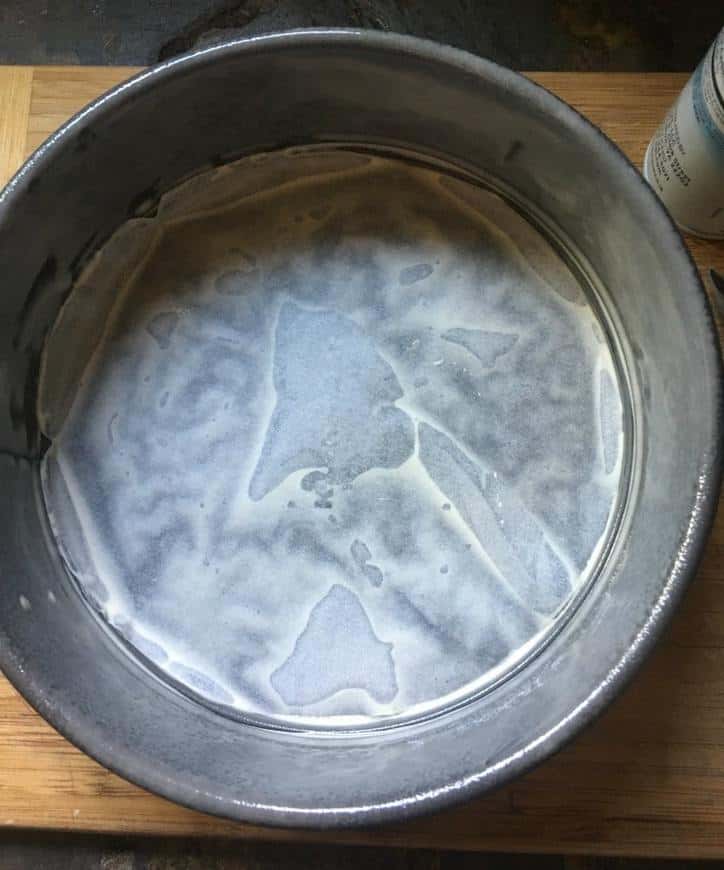 Mix the filling ingredients together for the cinnamon cake. 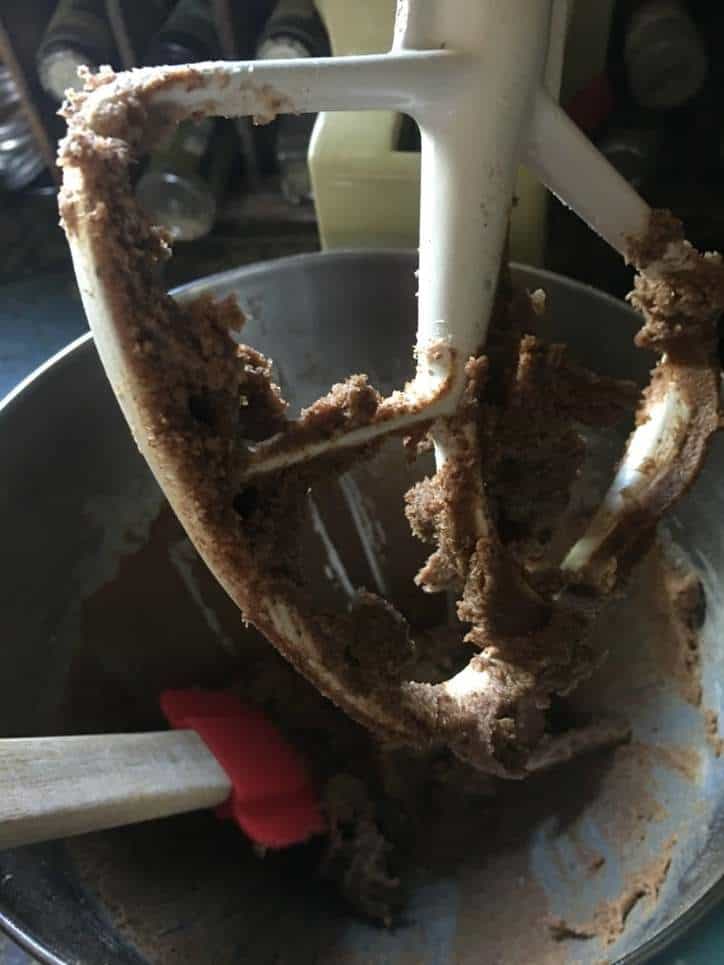 This is what the filling looks like creamed together

Whisk the wet ingredients together then mix those into the dry ingredients and stir till smooth.

Pour the cinnamon cake batter into the prepared cake pan. 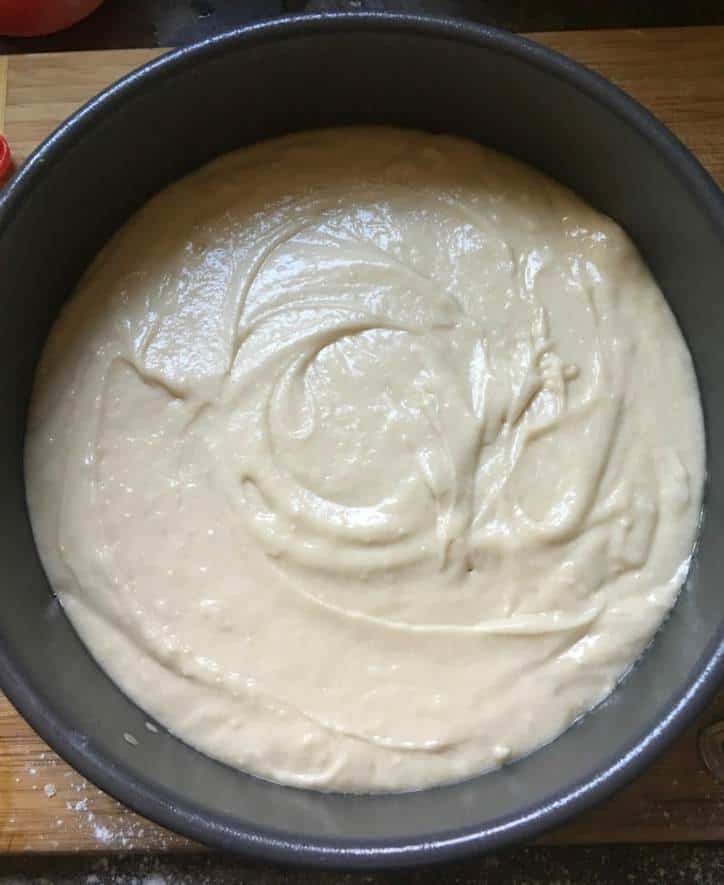 Pour the batter into the prepared springform pan

Starting in the center. Pipe the filling down into the cake batter slightly making the circles go in ever bigger rings to the outside of the pan. It’s OK if it isn’t perfect (as you can see from the photos) 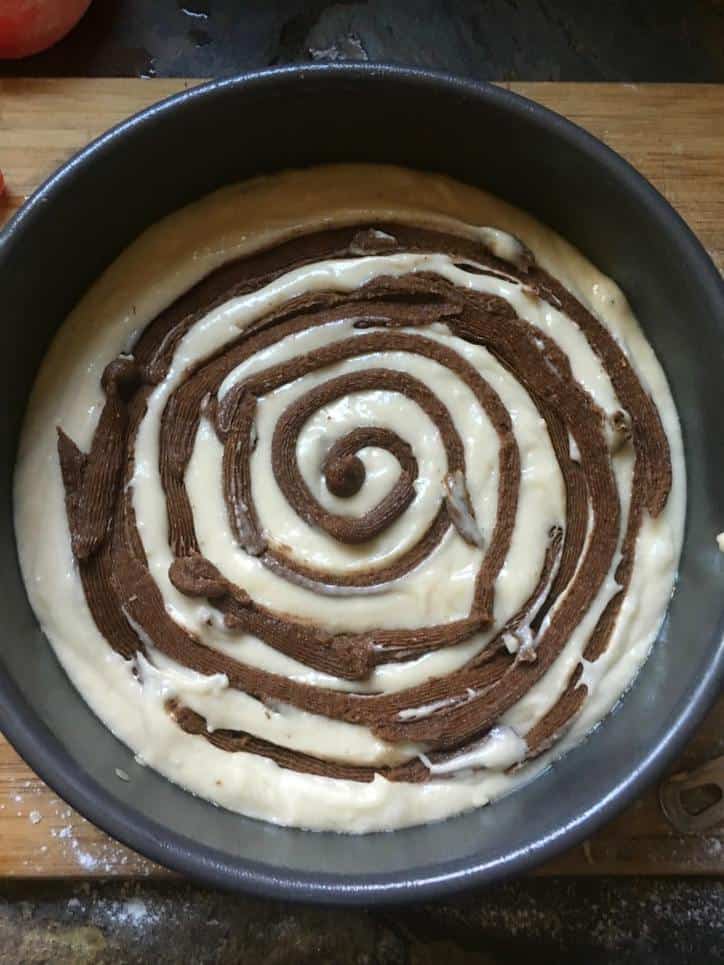 This is what it looks like (maybe yours will be prettier than mine!)

Bake the cinnamon cake and the filling will sink down into the cake as it bakes, slightly making beautiful cinnamon bun rings.

This is what the cake looks liked baked – let it cool completely!

Make the Icing and smooth it on top of the COOLED Cake.

What IS Cinnamon Cake Roll From Scratch?

Cinnamon Roll Cake from scratch is a home made cake with the flavors you normally find in a delicious bakery style cinnamon roll.

Fluffy cake with a buttery crusty top and a delicate cream cheese icing that drips in gooey delicious wonder down the sides. Hello Cream Cheese!

How Do You Make Cinnamon Roll Cake From Scratch?

TOOLS I LIKE FOR CINNAMON ROLL CAKE FROM SCRATCH

For this cake, I really appreciated my

SPRINGFORM PAN  – it is non stick and well made.

This is an affiliate link because I am an affiliate of Amazon. You can click the photo to go through to Amazon and see if you like it or not.

I have used mine for years and it still looks like new.

My  PARCHMENT PAPER is a must and this is the kind I have. If you click the photo you’ll go through to Amazon for a better look. This is an affiliate link.

I have a very inexpensive DISPOSABLE PIPING BAG AND TIPS like these. Again, this is an affiliate link.

TIPS AND TRICKS FOR CINNAMON ROLL CAKE FROM SCRATCH

PRO TIP: Save the extra icing to use as a warm dip for this cake!

Check out ALL the SWEETS in our SWEET SECTION!

One of the readers here at Loaves and Dishes made this cinnamon cake and then sent me a photo! Here is Rita’s cake and photo! WHOOT WHOOT Rita! I LOVE IT! (If you have made one of my recipes and would like to show me the results, just email me or tag me on facebook. I would LOVE to see it!) 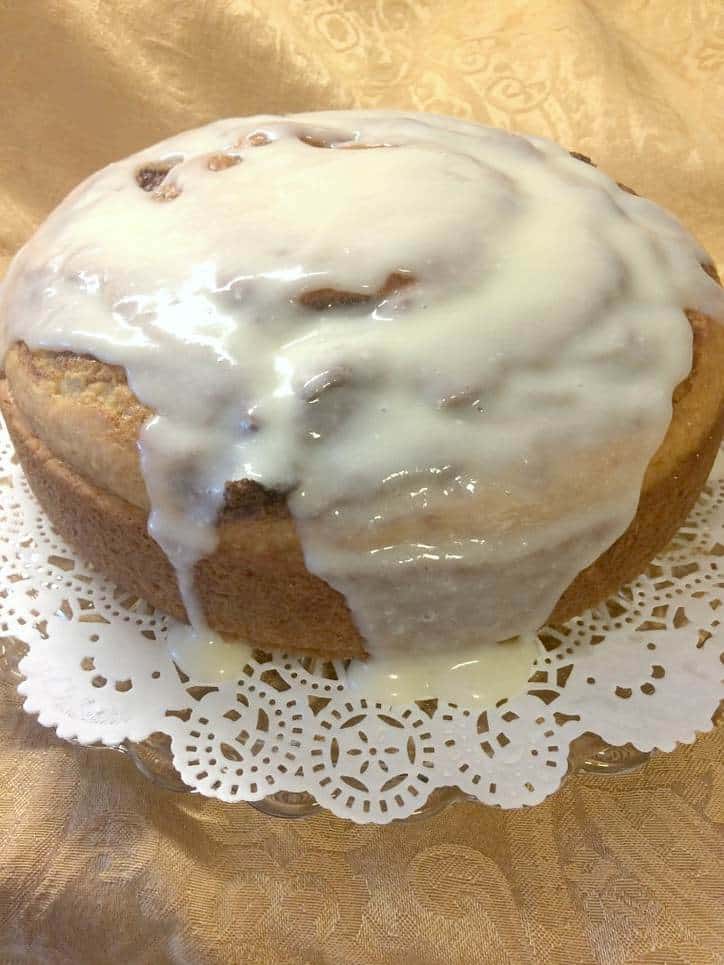 Please leave me a 5 star comment below in the comment section, all right? I would LOVE to know if you made this recipe or even if you are planning to! Of course, head on over to Pinterest, Facebook and Instagram and tag me with some photos of your creation!

Tips:  PRO TIP: Save the extra icing to use as a warm dip for this cake!

***This recipe first appeared on the pages of Loaves and Dishes on May 29, 2018 and is in honor of Marilyn, the sweetest and kindest person to ever work at a box office! She is always so kind and wonderful with my daughter Sarah. I developed this cake just for her. Thanks Marilyn!!! This recipe has been updated with new information, edited photos, nutrition information, tips and tricks, frequently asked questions and PRO TIP ***

Have you ever read that passage in Matthew about Jesus warning of the “Yeast of the Pharisees”. He tells the disciples to be careful of this and the disciples think he is talking about bread.

It always makes me wonder, if they heard Jesus say “Pharisees” and they knew that he was ALWAYS talking in parables, why in the world did their minds jump to bread. However, I just have to say, “whatever”. That is where the discussion went.

When they went across the lake, the disciples forgot to take bread. “Be careful,” Jesus said to them. “Be on your guard against the yeast of the Pharisees and Sadducees.”

They discussed this among themselves and said, “It is because we didn’t bring any bread?”

Aware of their discussion, Jesus asked, “You of little faith, why are you talking among yourselves about having no bread?  Do you still not understand?

Don’t you remember the five loaves for the five thousand, and how many basketfuls you gathered?

You don't mention the diameter of the springform pan. I have several sizes up to 11 inches. Please give this very important information in your recipe and in future recipes. I am taking a "leap of faith" and using an 8" or 9" pan (this seems like it would require that) because I'm a rather experienced baker. But stating the size of the pan is essential.

I just made this and it looks beautiful and tastes delicious - just the right amount and combination of sweet. What really surprised me was the texture of the cake - it is moist inside and homemade looking in the best way. I used orange zest and that gave it a deeper quality. Next time, I'm going to skip the step where you microwave the cream cheese, and I will add the 4 Tablespoons of milk one at a time in case I don't need them all. Maybe my microwave is too high - my icing came out like glaze. It was still delicious, but I prefer it a bit thicker.

I'm SO GLAD you enjoyed it! I personally think it's a beautiful cake. :). Of course I'm prejudiced. :).

I need to get a springform pan just so I can try this out! :) This looks delicious!

Hi Kathleen! I hope you love it!

This looks irresistibly delicious, and less labor intensive than my favorite cinnamon rolls. I can't wait to try it - and will make it as soon as my piping bag and tips arrive. (Everything else is ready!) Love how it uses basic ingredients, and love how it looks - an eye-catching variation on cinnamon rolls. Thanks, Wendi, and thanks for the verse, with your liberties!

Awww. Thanks Rita! It's a cake though and doesn't have the same consistency as regular cinnamon rolls. Lots of the same flavors going on though!! :)