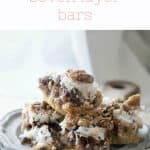 WHAT ARE MAGIC BARS?

You might also know these bars by their many other names that include: Paula Deen Seven Layer Bars, Guilt-Free Seven Layers Bars (NOT!), Magic Cookie Bars, Eagle Brand Seven Layer Bars, 5 Layer Bars and Coconut Layer Bars. That is a lot of names for the same thing! They are all variations on OLD FASHIONED SEVEN LAYER BARS.

You will note that in this post, I use seven layer bars in conjunction with magic bars. 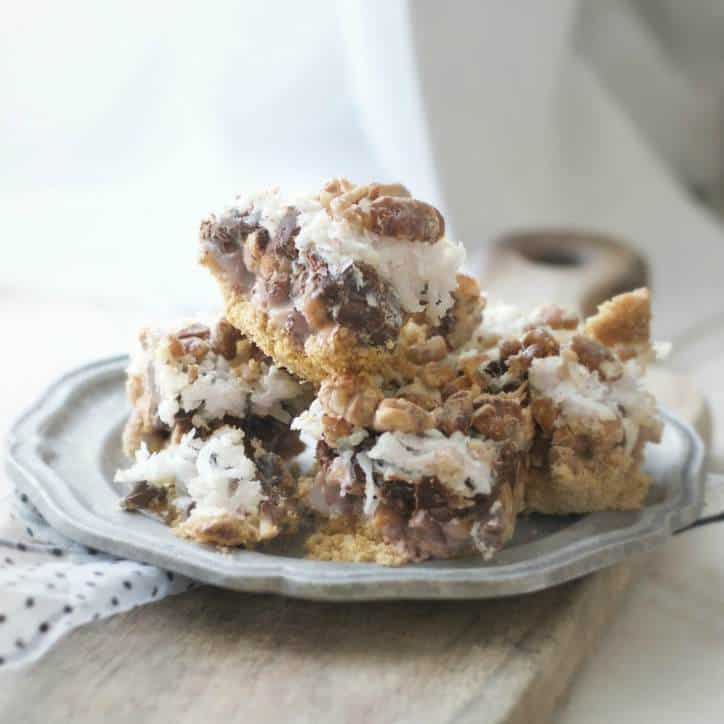 WHY THIS RECIPE WORKS FOR SEVEN LAYER BARS

When I checked all knowing Google – I found that this MAGIC BARS RECIPE is a fairly old recipe and it appears to me to have come from the back of some Eagle Brand Sweetened Condensed Milk originally (I could be wrong about this – it’s just a guess). 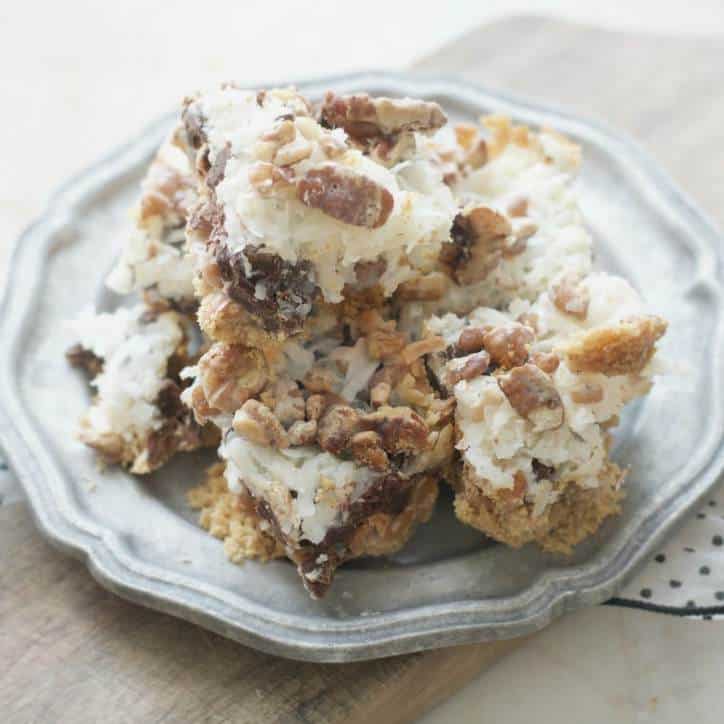 OTHER OPTIONS FOR YOUR MAGIC BARS SEVEN LAYER BARS

LET’S SEE HOW TO MAKE THESE MAGIC BARS

First prepare  your pan with aluminum foil and cooking spray. Then put the melted butter in the bottom of the pan 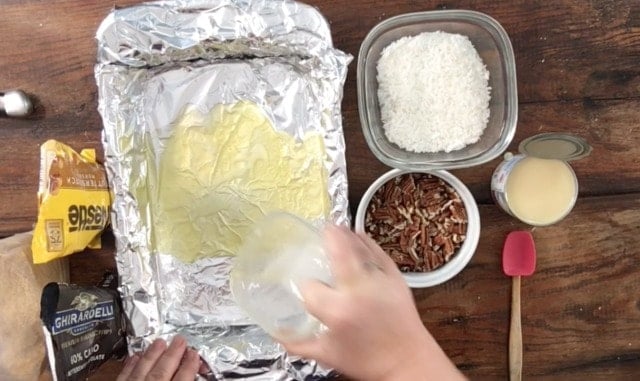 Then pour the crushed graham crackers into the pan 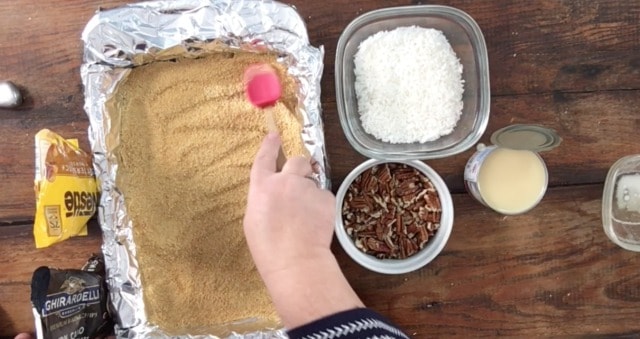 Then pour in the layer of chocolate chips

Add the butterscotch chips next 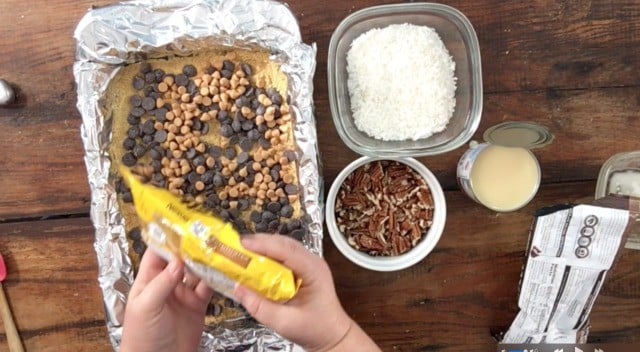 Sprinkle the coconut flakes over the top of the chips 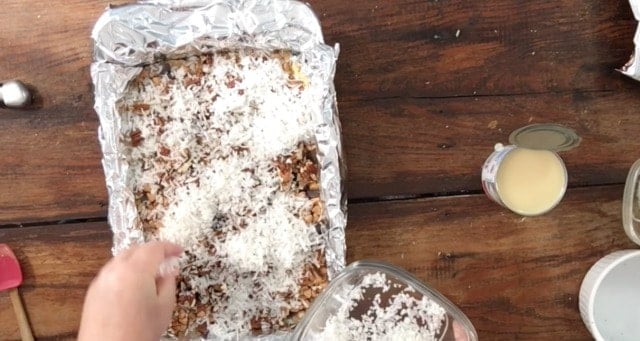 Then pour a can of sweetened condensed mil over the top 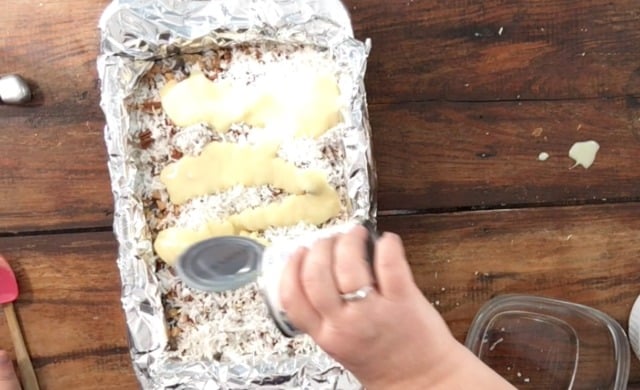 HOW TO MAKE SEVEN LAYER BARS WITHOUT COCONUT

If coconut isn’t your thing, just leave that layer out. It won’t hurt a thing.

HOW LONG ARE MAGIC BARS GOOD FOR?

Your magic bars will be good for about a week if you keep them in a covered container.

WHAT ABOUT HOW  I SHOULD STORE SEVEN LAYER BARS?

Put your magic bars in some type of resealable container such as a plastic container with a lid like you buy at the grocery store, in a zip lock bag or in a tupperware type container. A Christmas cookie tin will also work. If you simply leave them in the baking dish and cover with plastic wrap, they will become stale faster.

HOW DO I KNOW WHEN MAGIC BARS ARE DONE?

The coconut looks a little crusty and you can see the sweetened condensed milk bubbling up through the layers.

WHAT IF I DON’T LIKE NUTS IN MY SEVEN LAYER BARS?

You can leave off the pecans and use a substitution listed above or just leave them out. No harm done.

CAN MAGIC BARS BE FROZEN?

Yes, they can be frozen. You may notice that they don’t hold together quite as good once they thaw.

IF YOU ENJOY THESE OLD FASHIONED SEVEN LAYER BARS 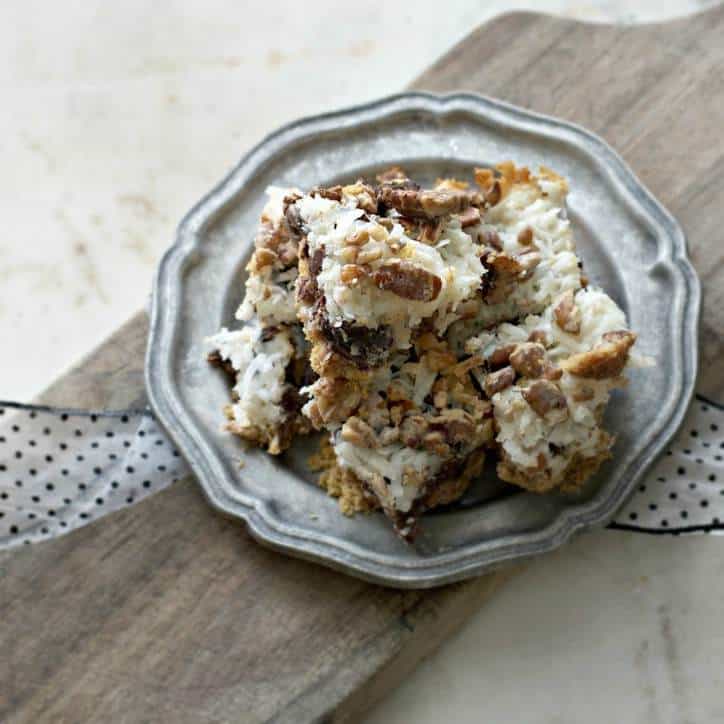 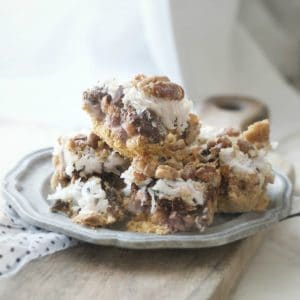 Supposing that my internet connection comes back up so that I can edit the photos and get this posted, you will be reading this sometime on about September 22. Maybe I should have saved myself some trouble since a number of people are supposing that the world will end on September 23.

Believe me, if it does, you will be glad that you had some of these OLD FASHIONED SEVEN LAYER BARS before it all went down.

If however, my cable company is NOT able to get my internet functional in time, then I guess I am just writing this post for nothing and maybe some future civilization will find it in my google docs and wonder what it is about.

In fact, I have a google doc titled “crazy stuff I’ve heard”, I completely forgot to put the “end of the world on September 23” in there. I’ve got to go do that right now.

Wow – I’m really getting off in the weeds here. The point I’m trying to make is, you are probably safe to go do whatever you like to do this weekend and if you have something important due for work or school on Monday, you better go ahead and do it.

The Bible says, plain as the nose on my face that NO MAN WILL KNOW the day and time of his reappearance.

Which brings me to another point, many people believe that Jesus is coming on Saturday. However, what I have read is that there is some type of planetary alignment happening and that this will cause all types of catastrophes.

So, like I always say, go consult the actual scripture. See what it says. Matthew 24 is where we find the scripture where Jesus is telling his disciples about his return. I hope you will go pull out your own bible and read it for yourself.

One thing that stands out to me is that Jesus blatantly says that we will be hated and put to death by the people of the world for his name sake. Many will turn away and these times will be cut short or no one would endure.

That tells me that things are going to get a whole lot worse before they get better.

I won’t put all of Matthew 24 here, it is just too long for this space. You can go look it up though.

I don’t believe Jesus is coming on Saturday, but I do believe he is coming sometime – in his own time. I think we better be ready.

“Therefore keep watch, because you do not know on what day your Lord will come.  But understand this: If the owner of the house had known at what time of night the thief was coming, he would have kept watch and would not have let his house be broken into.  So you also must be ready, because the Son of Man will come at an hour when you do not expect him.

“Who then is the faithful and wise servant, whom the master has put in charge of the servants in his household to give them their food at the proper time?  It will be good for that servant whose master finds him doing so when he returns. Truly I tell you, he will put him in charge of all his possessions.  But suppose that servant is wicked and says to himself, ‘My master is staying away a long time,’  and he then begins to beat his fellow servants and to eat and drink with drunkards.  The master of that servant will come on a day when he does not expect him and at an hour he is not aware of.  He will cut him to pieces and assign him a place with the hypocrites, where there will be weeping and gnashing of teeth.

Made these again and they are PERFECT!