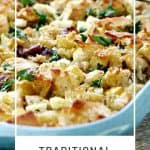 It is an itch you just HAVE to scratch. No, It’s not a skin fungus – silly. It is a metaphorical itch. An itch to do something memorable and spectacular. Perhaps your itch is to do something you never did before. You want to complete a “bucket list” item? Conceivably, you might need to figure out what your bucket list items are. What does this have to do with Traditional Holiday Stuffing you ask? Hang with me and I’ll get to it…

I’m in the middle of one of these allegorical itches right now. I will soon turn 50 and I sense life dashing past me so quickly that I don’t know if I will ever catch up. There is a lot of living to do and I better dash for the finish line if I am going to get it all done – do you feel that way too? 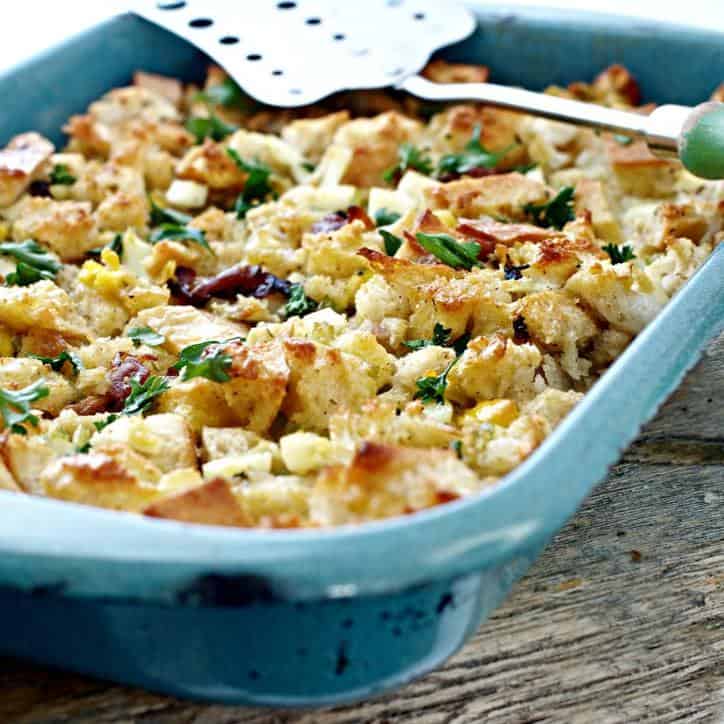 I hope that you do – I don’t want to be alone. I’ve got some hiking and bike riding goals. I want to share with you a photo I took last week of my hike up to the top of Wolfe Rock. Beautiful eh? I think the haze is because of the fires over in the Western part of the state – but I’m not sure.

Do you have any bucket list items? I hope so – I would love to know what they are? Would you share with me in the comments?

A number of years ago, my bucket list included learning the elements of cooking so that I could whip up just about anything in my kitchen and have it be delicious every time. I’ve mastered quite a few. I still have a lot to learn.

The seafood fiasco I caused last night is a good reminder of how much I have left to learn. I don’t eat seafood. Therefore, I do not cook seafood. I am allergic to shellfish and besides that I think seafood smells GHASTLY. In the event of a world catastrophe in which we are mostly left eating fish – I will likely starve to death. However, being able to cook seafood is one of my bucket list items.

My family LOVES seafood. I want to see their smiling faces around my dinner table enjoying one of their favorite dishes. At this point, in order to do this, I’m gonna have to order some carry-out from the Mayflower.

Last night I tried cooking scallops. Maybe it is because I used frozen scallops – I don’t know. All I know is that I used Alton Brown’s seared scallops recipe – which is so simple – I am sure that any orangutang could prepare the dish.

I don’t have pictures to entertain you with – but let’s just say that the smoke alarms went off in the LIVING ROOM (20 feet and two small doorways from the kitchen). The house now smells like a stinky burned up bait box. The scallops were limp, pale and gross looking. Poor hubby ate them all anyway, I think out of pity for me. He made a face I’ve never seen when he sampled them – not a good face either. Certainly not the eyes closed, “this is so delicious” face that I was hoping for. Lol.

So – I say all of that to show you – you aren’t alone. I have EPIC COOKING FAILS too. I won’t give up though. I’ll try again with some fresh scallops. If that doesn’t work, I’ll seek out someone who actually knows what they are doing and get them to help me. I’ll find a way.

I encourage you to keep trying with your cooking too.

This Traditional Holiday Stuffing though, is really simple. We love easy delicious recipes, don’t we? The only primate required to prepare this dish is a human being – you. No orangutans please. I’ve heard that they don’t clean up the kitchen when they are done anyway. However, they have nice long arms that would probably be good for scratching your back for those itches I was talking about earlier! 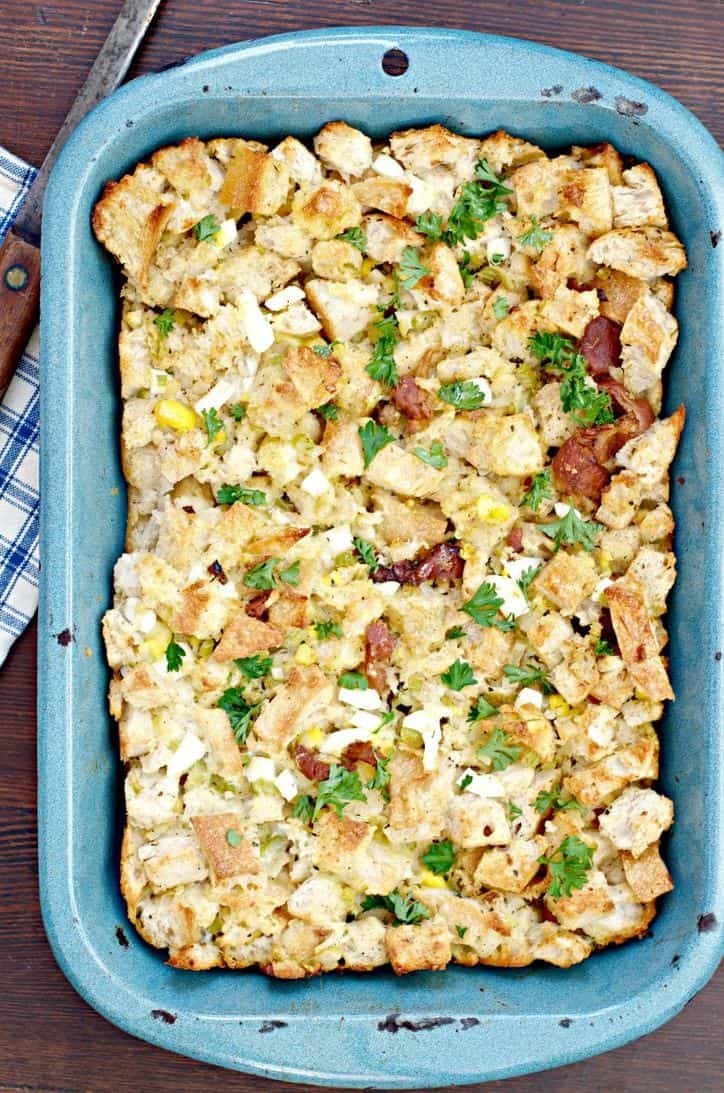 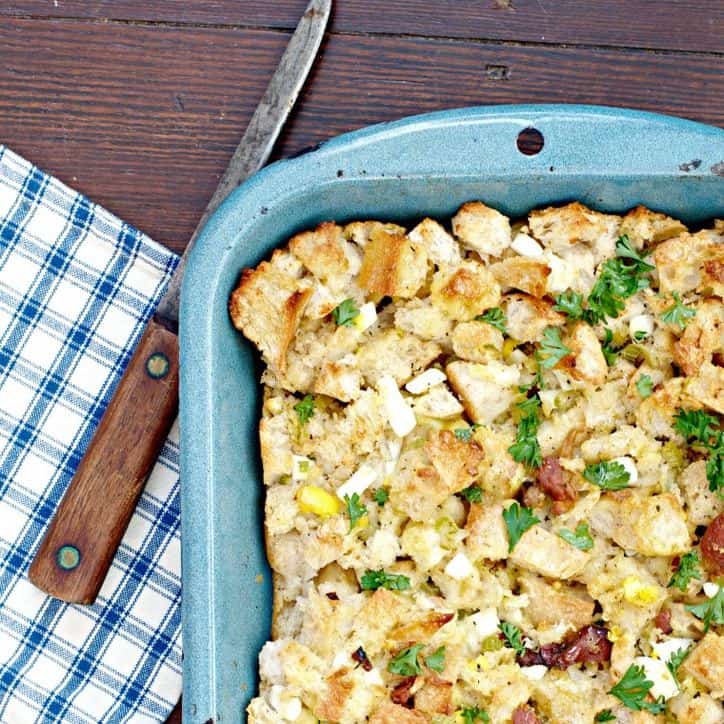 THE RECIPE FOR Traditional Holiday Stuffing 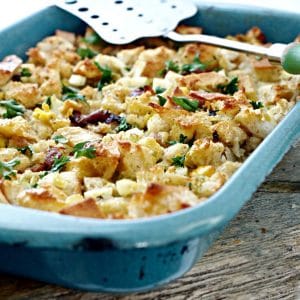 If you like yours a little more wet then add more stock.

We were talking earlier about bucket list items. I want to add something to that conversation. I think it goes without saying, but I’ll say it here anyway: pray over your items. God will lead you in the right way. Honor Him with your desires and with your works.

Secondly, have you ever heard that what you think about you also become? This saying is commonly attributed to Buddha. It is a Christian belief as well and something that I absolutely believe.

Paul says as much here in this passage. What has your mind been resting upon lately? Have you been thinking about how stupid the opposite political party is? Have you been seething that someone else is so pretentious, self-righteous and petty? Guess what? If that is what you are thinking about, that is what you will become. You might want to consider setting your mind on something else.

Don’t believe me? Check out this scripture.

Phillipans 4: 4-9. Rejoice in the Lord always. I will say it again: Rejoice! Let your gentleness be evident to all. The Lord is near.  Do not be anxious about anything, but in every situation, by prayer and petition, with thanksgiving, present your requests to God. And the peace of God, which transcends all understanding, will guard your hearts and your minds in Christ Jesus.

Finally, brothers and sisters, whatever is true, whatever is noble, whatever is right, whatever is pure, whatever is lovely, whatever is admirable—if anything is excellent or praiseworthy—think about such things. Whatever you have learned or received or heard from me, or seen in me—put it into practice. And the God of peace will be with you.

Made this recipe for the holidays and everyone loved it!

Marisa Franca @ All Our Way

Wendy! Wendy! Wendy! Scallops are not for the faint of heart. They are tricky because if you cook them too long they're like rubber. I'd never use frozen. But there are a lot of fish that's mild and doesn't "stink" up the house. Fresh tuna is wonderful -- again you can't overcook it. If you don't like to see rare, I wouldn't use tuna. Fresh wild caught salmon is delicious. As you can tell, we are fish eaters. Love it! Could have it every night of the week. Cod is delicious but a little strong is smell before cooking so I'd stay away from that. Flounder is terrific!! It's a very mild fish and it would lend itself well to baking. And bucket list?? Oh, my heavens, I've got about 20 years on you and there are still so many things I want to do -- to cook -- to experience. So just fill each day with something you want to do. Have a great weekend.

Hey Marisa! Thanks for the pointers. Oh the scallop fiasco. Ewww. At least the smell is gone now. Lol the things I want to cook goes on and on!! You have a great weekend too!!