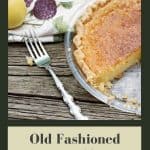 When life gives you lemons don’t make lemonade! Be happy and  make an old fashioned lemon chess pie! Then just say, “Thanks life!”

Don’t you LOVE the ice cold tart creamy taste of a delicious old fashioned lemon chess pie on a hot day? The best! So refreshing and delicious! Super yum!

Recently, my friend Olivia who is a true connoisseur and purveyor of all things southern belle-ish reminded me that it would be lovely to have an easy and delicious lemon chess pie recipe. She had a few other suggestions, but I’ll save those for a later post. 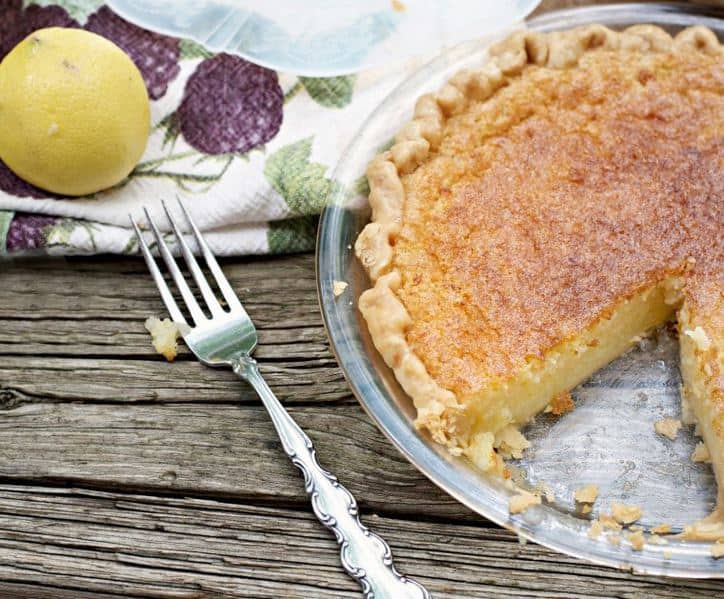 I told her I would get right on it. However, here it is WEEKS later and I only JUST NOW dug up the recipe that I have for lemon chess pie. I am still looking for my chocolate chess pie recipe – hang on Olivia – I know it is here somewhere. I just have to find it.

That’s probably telling more than you really want to know about how my recipe organization goes.

Isn’t that the super fun thing about a food blog though? People read it and have suggestions! Sometimes it spawns all kinds of fun conversations about things like…. PIE! 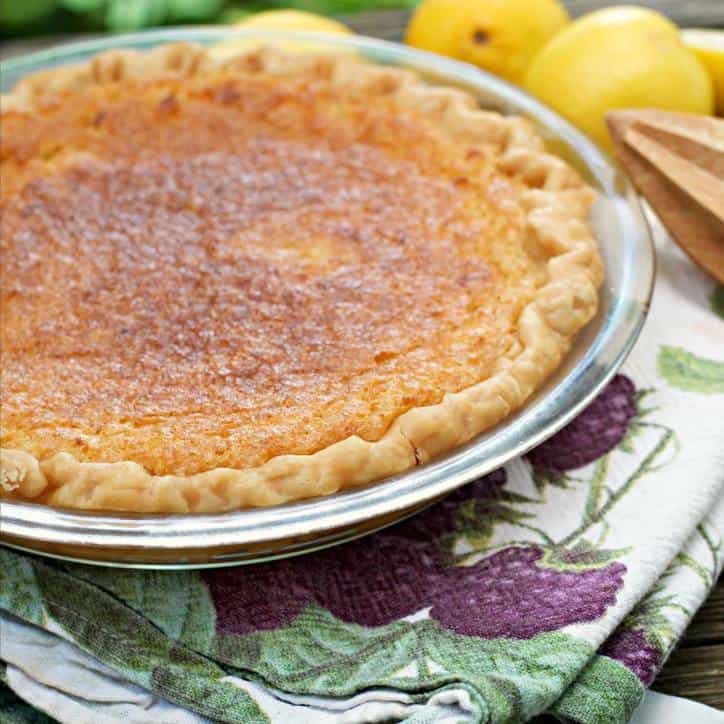 This recipe comes from a stash of recipes that I found at an estate sale two summers ago. I KNOW I told you all about it on my post about Candy Bar No Bake Ice Cream Pie . If I  had more space at home I would have arrived back here with WAY more than I actually bought.

I updated the recipe with more lemon juice, lemon zest, slightly more evaporated milk and that yummy cornmeal that makes such a crusty and DELICIOUS upper crust.

In case you are wondering about the name “Chess Pie”, I covered that in a post HERE.

If Old Fashioned Pies are your thing, You are at the RIGHT PLACE! 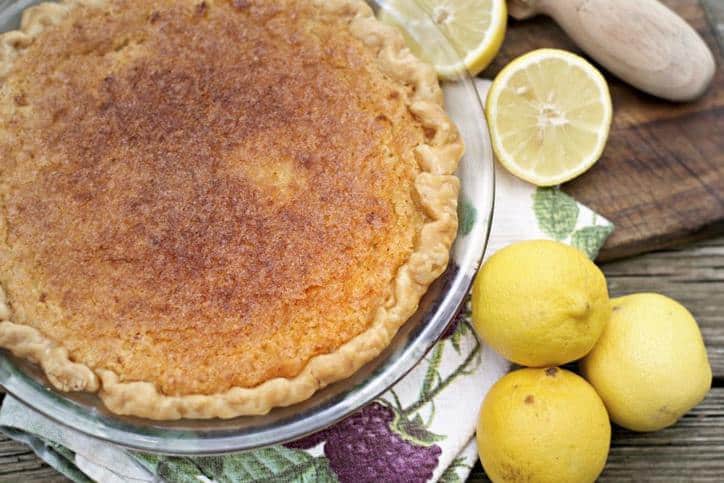 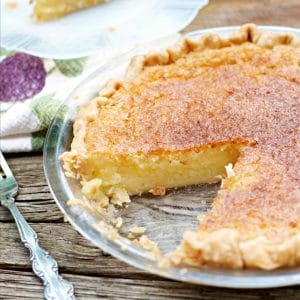 To make this as light and airy as possible, make sure to mix the ingredients well, especially the eggs.  Never add eggs to a hot mixture, always temper the eggs first. 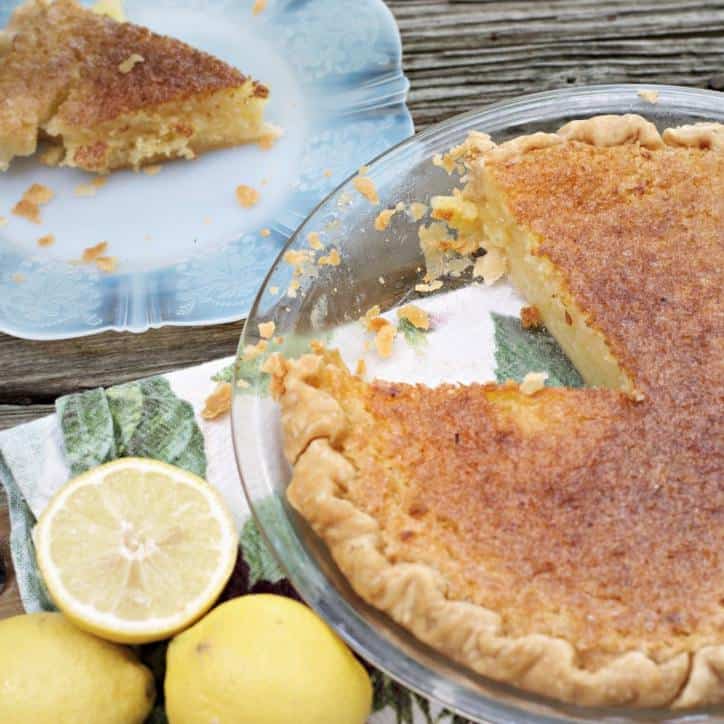 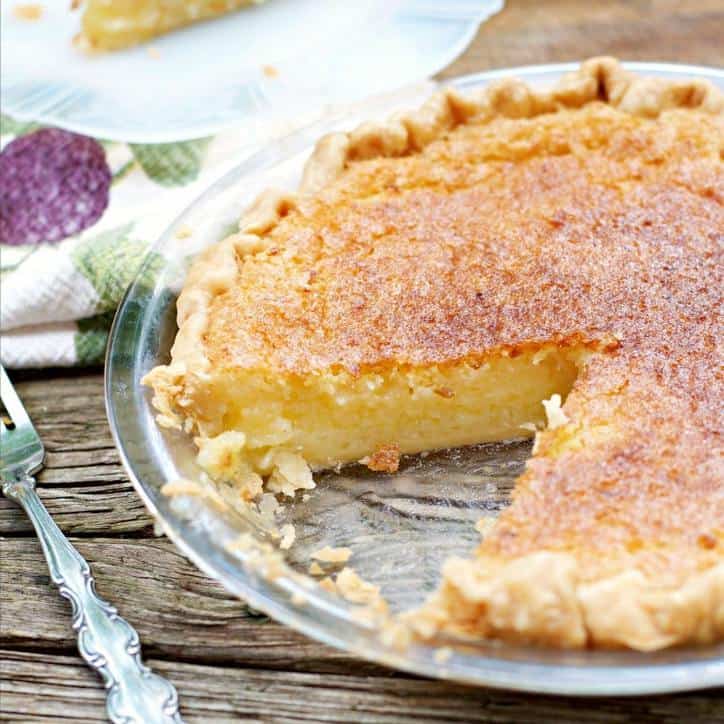 This week I listened to a TED talk by Anne Lamott – one of my favorite authors. In her talk, Anne speaks about God and Noah’s first conversation. She says, “God said,  ‘Noah, you better put your shoes on’ (for this job)”. (I’m taking some liberties with these quotes here).

That made me consider, “I wonder what God DID say to Noah first”. I was ASTONISHED to find something else while looking this up.

Do you know why God decided to bring a flood upon the earth? I’m sure, like me, you have always known it was because the people were “bad”. I always assumed that the folks were “bad” in a way similar to Sodom and Gomorrah (we all know the kind of stuff that went on there, right?).

But, if that is what you are thinking was happening in Noah’s day, then you would be wrong.

Nope, the Bible says TWICE very distinctly that the people were VIOLENT and God was pretty upset about this.

You might know that often bible translations run a little differently. So, I looked up what the other translations say – pretty uniformly they all say that the people were VIOLENT and the land was full of VIOLENCE and God didn’t like it.

I’m still a little speechless about this. God, who created  all is willing to wipe everyone and everything out because they were VIOLENT and filled with VIOLENCE. Makes you think, doesn’t it? There is a lot of violence in this world today.

I’m going to have to give more thought to this. It certainly gives me more pause as to what I think about war and the fighting that typically goes on in the world.

Oh, and by the way, what did God say to Noah first? He didn’t say, “Put your shoes on” – but he probably should have said, “do you have a pencil and paper ready”. God started off speaking to Noah giving the specifications for building the ark. Noah must have had a keen memory!

When human beings began to increase in number on the earth and daughters were born to them,  the sons of God saw that the daughters of humans were beautiful, and they married any of them they chose. Then the Lord said, “My Spirit will not contend with humans forever, for they are mortal; their days will be a hundred and twenty years.”

The Nephilim were on the earth in those days—and also afterward—when the sons of God went to the daughters of humans and had children by them. They were the heroes of old, men of renown.

The Lord saw how great the wickedness of the human race had become on the earth, and that every inclination of the thoughts of the human heart was only evil all the time.  The Lord regretted that he had made human beings on the earth, and his heart was deeply troubled.  So the Lord said, “I will wipe from the face of the earth the human race I have created—and with them the animals, the birds and the creatures that move along the ground—for I regret that I have made them.”  But Noah found favor in the eyes of the Lord.

This is the account of Noah and his family.

Noah was a righteous man, blameless among the people of his time, and he walked faithfully with God. Noah had three sons: Shem, Ham and Jepheth.

Now the earth was corrupt in God’s sight and was full of violence.  God saw how corrupt the earth had become, for all the people on earth had corrupted their ways.  So God said to Noah, “I am going to put an end to all people, for the earth is filled with violence because of them. I am surely going to destroy both them and the earth.  So make yourself an ark of cypress wood; make rooms in it and coat it with pitch inside and out.  This is how you are to build it: The ark is to be three hundred cubits long, fifty cubits wide and thirty cubits high. Make a roof for it, leaving below the roof an opening one cubit high all around. Put a door in the side of the ark and make lower, middle and upper decks.

God tells about the flood

I am going to bring floodwaters on the earth to destroy all life under the heavens, every creature that has the breath of life in it. Everything on earth will perish. But I will establish my covenant with you, and you will enter the ark—you and your sons and your wife and your sons’ wives with you.  You are to bring into the ark two of all living creatures, male and female, to keep them alive with you.  Two of every kind of bird, of every kind of animal and of every kind of creature that moves along the ground will come to you to be kept alive.  You are to take every kind of food that is to be eaten and store it away as food for you and for them.”

Noah did everything just as God commanded him.

I made this pie the other day and while I mostly love it, one part either didn't go right or if it did I'm not a fan. The cornmeal didn't float to the top and make a crust up there like the recipe mentioned, instead it sank to the bottom and made a second crust right up against the pie crust. The corn crust under is almost gummy, not crispy at all, and doesn't really have any flavor. The end result is a weird mouthfeel and chewiness that isn't entirely pleasant to me. Do you know if there's something I did wrong with the cornmeal that made it do this, or is this how it's supposed to go? Aside from that, this is a lovely pie and I'm hoping I can fix this issue I'm having with the recipe.

Hi Sterling, Wow! That sounds terrible! I have no idea why your cornmeal didn't float! Was it cornmeal mix maybe? I have picked up the mix rather than plain cornmeal accidentally at the store before and they are definitely a different product. That's the only thing I can think of. You can certainly leave the cornmeal out next time. It won't make that huge of a difference in the end product.

OK - I tried this recipe and even my husband who doesn't like lemon flavor liked it!

Robbie here! New to your site and looking forward to going through all of the recipes.

Have a blessed day!

Hi Robbie! Welcome! Glad to have you!

I love your site

Thank you Darby! I hope you will come back soon! :)

Blogging is the new poetry. I find it wonderful and amazing in many ways.

Thank you for this good recipe for a good Chess Pie. I love your Spirital writtings too. I will never forget how much it meant to me. I know you are a wonderful Cook,Wife Mother,and I bet a precious teacher in a good Bible class at your church. This all made me feel so good just reading what you have written. Thanks again and may God Bless you with many more good recipes for everyone..... A Happy Cook from this side of the net, Barbara Bomprezzi