Perfect, tender, amazing potato salad comes from knowing exactly how long to boil potatoes for potato salad! I mean, seriously, it’s the base of the entire thing! 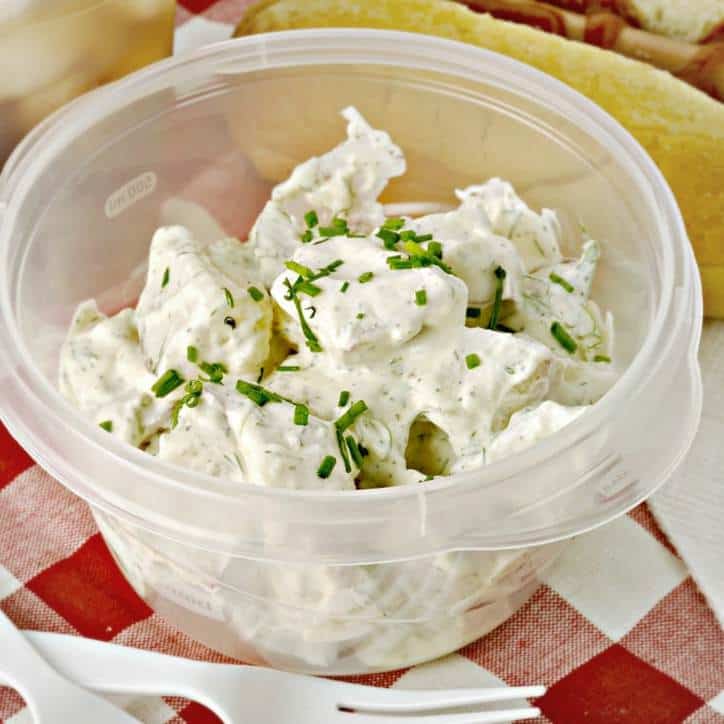 STEP 1.  Boil Water . It’s just like How to Boil Cauliflower!

Put on about 3 quarts of water to boil! Add 3 Tbs of Kosher salt and let it come to a good boil! 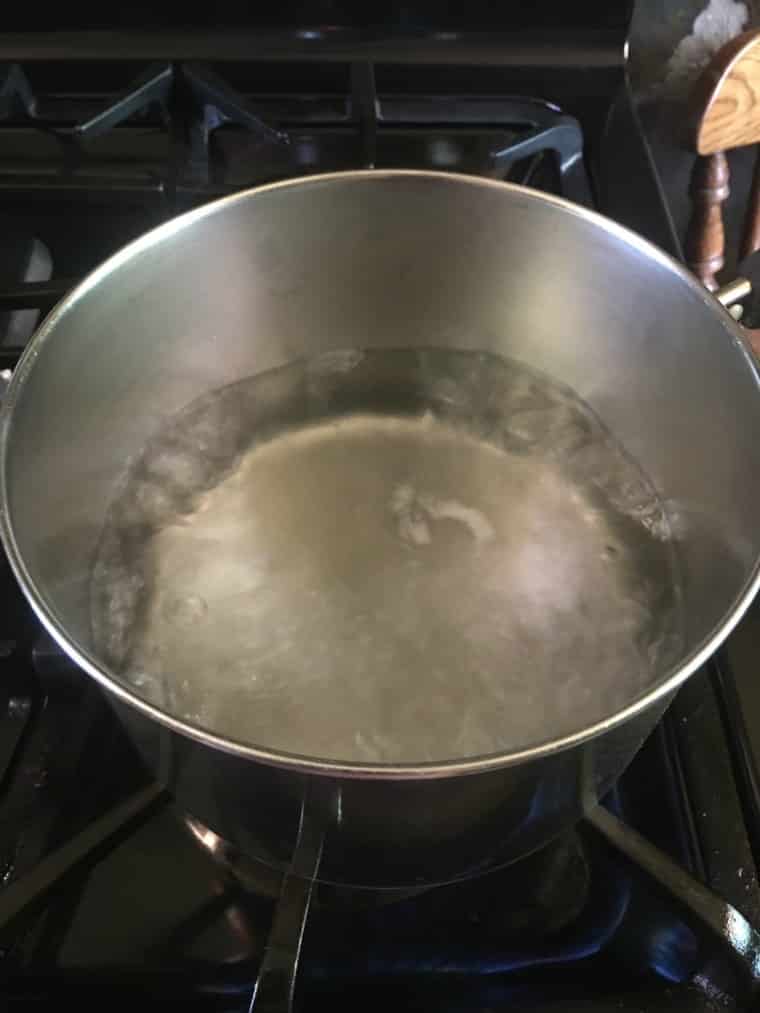 Peel your potatoes and cut them into chunks about this size – 2″. 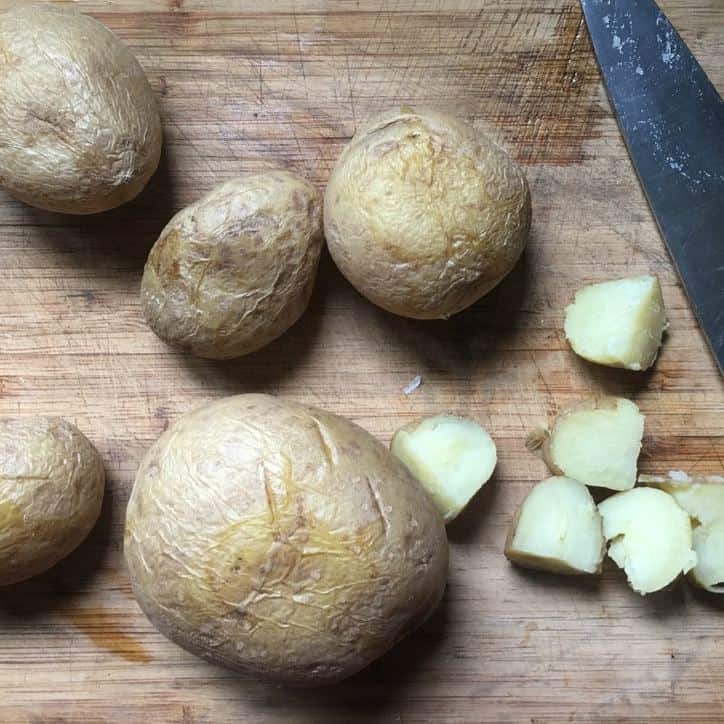 These are whole potatoes boiling but you will want to bring your cut potatoes up to a simmer like what is shown in this photos. 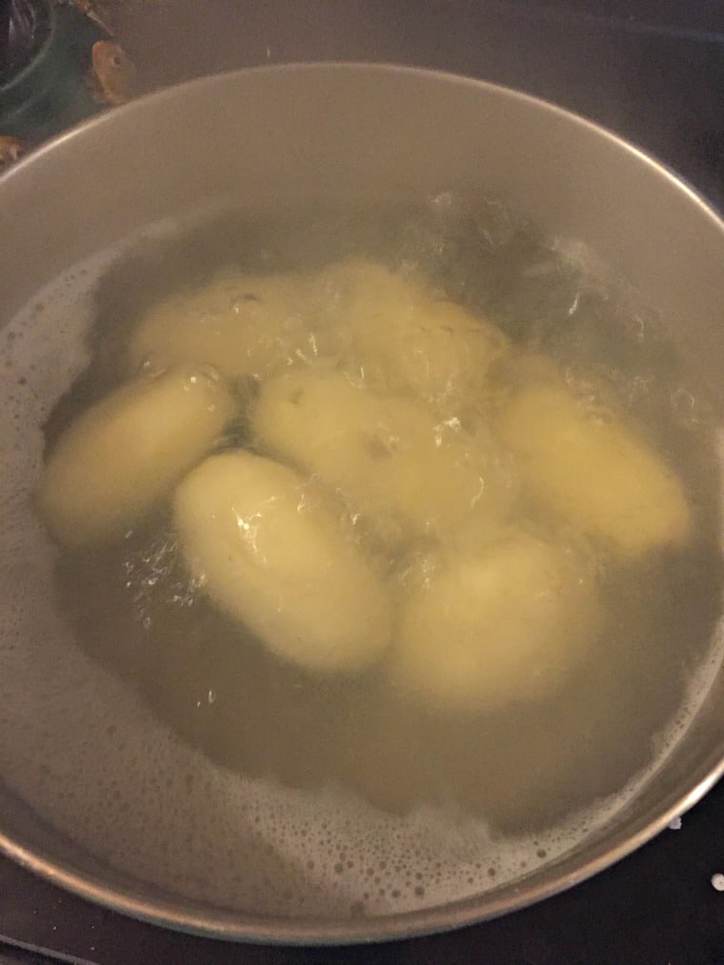 STEP 4.  Mix up the Potato Salad 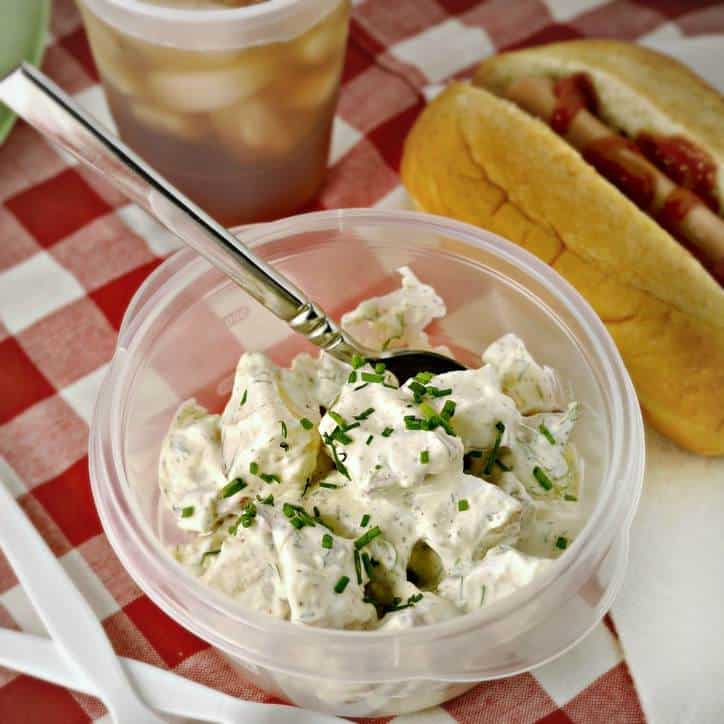 How Long to Boil Potatoes for Potato Salad

Given that the potatoes are cut into 2” cubes and are all the same size, that you are using Russet or Idaho potatoes and potatoes are peeled, then you will want to cook them for 10-15 minutes over medium high heat. You will know the potato is done when a fork easily pierces the flesh when poked.

If you are cooking with the skin on, a larger potato or a different kind of potato, it may take a different length of time.

That said, potatoes are ready when a fork pierces the potato easily

What to Serve with Potatoes for Potato Salad

Do You Cut a Potato Before Boiling It For Potato Salad?

Yes, cut the potato into 2” cubes. Make sure that all of the pieces are about the same size so that they cook evenly.

What Kind of Potatoes Do I Use For Potato Salad?

Actually, any kind of potato will work for potato salad. Most people use Russet or Idaho Potatoes but red potatoes or Yukon Gold potatoes work well too. The skin on red and yellow potatoes is thinner and can be left on for the potato salad, thus avoiding the problem of peeling the potatoes.

If you are using a Russet or Idaho Potato (standard baking potato) then, yes, you need to peel the potato before you boil it. The skin on Idaho and Russet Potatoes are just too thick to leave the skin on. So, use peeled potatoes!

How Long Do You Boil Potatoes With The Skin On For Potato Salad?

Boil potatoes with the skin on (red potatoes and yellow type waxy potatoes) for about 20 minutes if the potatoes are about 2” chunks or whole potatoes. When the potato is done for potato salad, a fork will pierce the flesh easily when poked. 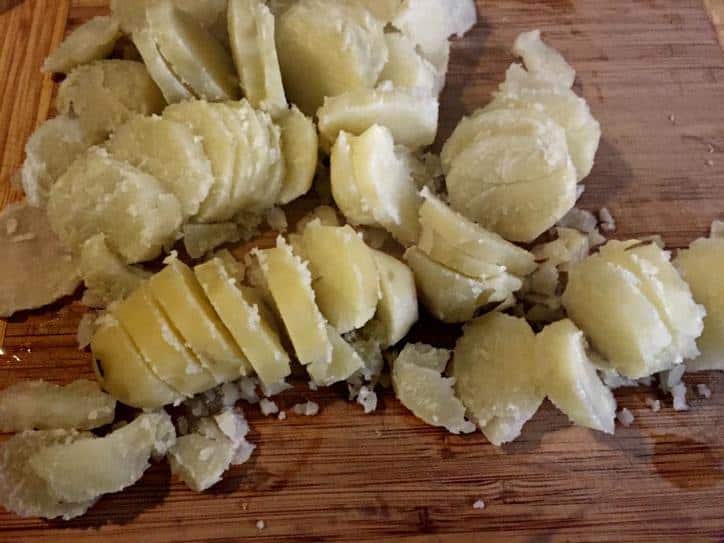 Why Does Potato Salad Get Runny?

Potato salad gets runny for a few reasons that include:

How Long Does Potato Salad Keep in the Fridge?

Homemade Potato Salad will keep in the fridge for about 5 days. Do NOT allow it to sit out for more than 2 hours.

Can I Freeze Potato Salad?

Nope.  Potato salad doesn’t freeze well. Go ahead and eat it all now. Share it with a neighbor! Mayonnaise and sour cream don’t work well for the freezer.

Do I Need To Wash The Potato Before I Boil it for Potato Salad?

Yes, wash the potatoes before boiling them in a large pot for potato salad. Potatoes often have quite a lot of residual field dirt and while it probably won’t hurt you, it is crunchy and has a terrible taste/ mouthfeel

Do I Need To Salt The Water Before Boiling a Potato?

Yes, salt the water with more salt than you think you will need. Use 1 Tablespoon of Kosher Salt per quart. This is the same with boiled potatoes as with mashed potatoes.

How Do I Cut Up a Potato Before Boiling It For Potato Salad?

Want To Learn More About Potatoes?

The USDA Snap info has a TON of info on Potatoes!

Can I Add Broccoli to My Potato Salad?

Yes! Absolutely! Do IT if you LOVE broccoli. (Just know that it isn’t really the first thing that people think of when they think potato salad).

You will want to cook the broccoli a little first so that it isn’t raw. 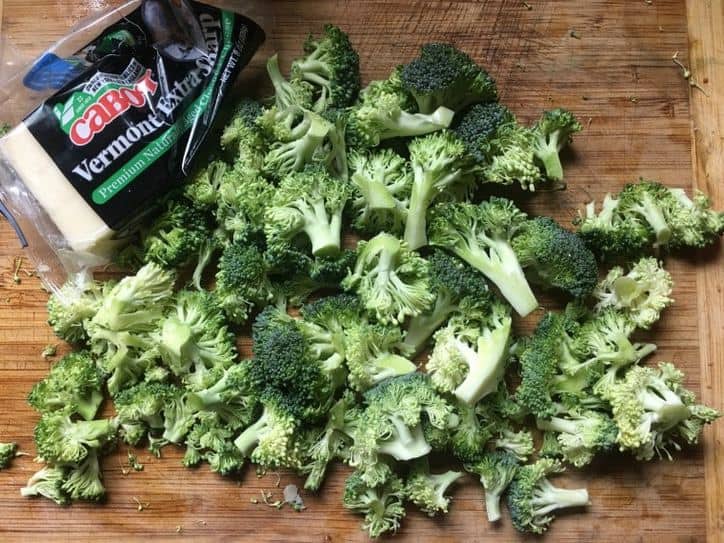 If You Enjoyed This Recipe for How Long to Boil Potatoes for Potato Salad, you might enjoy these other potato recipes at Loaves and Dishes…

How to Microwave a Baked Potato

How to Make a Perfect Steakhouse Baked Potato

How To Cook Canned New Potatoes

Want To Really Help Out Other Cooks?

Leave a comment and a 5 STAR rating in the comment section below. That helps others find Loaves and Dishes and know that this is the best place for learning to cook and terrific recipes. Here’s my favorite basic potato salad recipe! 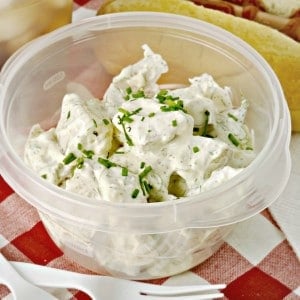 How Long To Boil Potatoes for Potato Salad

Sometimes I just need to hear this and be reminded. Maybe you do too?

Love potato salad and now I know how to use boiled potatoes rather than baked. Thanks!!!

I love potato salad and your recipe sounds delicious. What I don’t like is lumpy potato salad. Do I need to cook the potatoes longer or just follow your steps and prepare it the same way without the lumps?

Very thorough discussion,IMHO.I am making potato salad today, using red potatoes ( with the skin on!)and believe it will turn out very well.Thank you for your diligence and 'Amen' to Ephesians 4:32.

Hi Scott! I hope they turned out perfectly!

Thank you Soooo Much! This comes out perfect everytime. I add a few black olives to it & it's my husband's favorite 😋

Hi Lee Lee, Thanks for coming back and leaving a comment, I appreciate it so much. I'm glad your husband loves it!